When I told our daughter that we were going to turn a potato into a groundhog with some brown paint and googly eyes I immediately had her attention. This is a cute groundhog's day craft that lets your child choose which version of the story they would like to see happen. They get the option of putting clouds in the sky (no shadow) or a sun (shadow). Our daughter chose to put clouds in the sky so the groundhog wouldn't see his shadow and spring would come early so she could go outside and play! 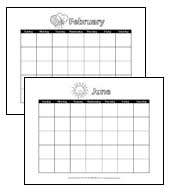